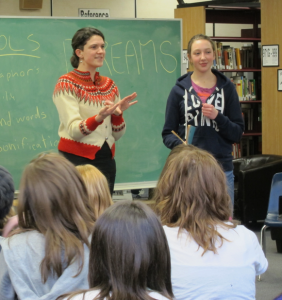 In 2005 Magpie was instrumental in co-founding WordPlay poetry in schools program in Vancouver. This has since blossomed to take performance poets/spoken word into schools to do hundreds of workshops in the lower mainland. It has also spawned the Vancouver Youth Poetry Slam, and the BC high school poetry slam championships Hullabaloo.

I love to share what I do with other people.

Please contact me for speaking or workshop possibilities: magpieulysses@gmail.com

“Before Magpie, my writing class preferred trigonometry, and how to quietly go unnoticed, nervously whispering their orders to fast-food intercoms.  Before Magpie, they complained about a family of winged things living in their bellies, and a dusty cloth stuck in their throats. Before Magpie, they scribbled faint notes hidden at the bottom of their bag, like they had nothing to say. Like nothing mattered.”- Jeff Pew, Creative Writing, Selkirk Secondary School, Kimberley, BC

“The students LOVED her. Overall, they enjoyed the experience of being willfully, but unknowingly motived to write. They were writing and didn’t think of it as a “task” and that was the most fascinating aspect for them. That in addition to the verbal joust. A little healthy competition can be so motivating sometimes.” Elaina Devison, Teacher, Smithers Secondary School

” … I witnessed students and teachers being very engaged and enthused by her “spoken word” poetry presentations. I would highly recommend Magpie for both school and community performances/ workshops.  I am truly sorry that we no longer have her living in the Bulkley Valley.” Teresa Monkman, Teacher-Librarian, Smithers Secondary School, Smithers, BC

* Grant recipient Canada Council for The Arts ~ explore and Create ~ 2018